Like many aquatic species, sea turtles can be extremely difficult to observe in the wild so important aspects of their behavior remain poorly known. However, using new, high-definition animal-borne video cameras, we have gotten an astonishing look into the lives of these charismatic yet elusive creatures.

Motivated by a lack of understanding of the basic biology of endangered sea turtles, we used custom-built animal-borne video cameras to study the behavior of green and loggerhead turtles in Shark Bay, Western Australia. The researchers conducted over 120 camera deployments, yielding nearly 400 hours of video footage and an unprecedentedly detailed, first-hand view of turtle foraging patterns, diets, habitat use and social interactions – information vital to effective conservation.

The first peer-reviewed article to emerge from this research, published in the Journal of Experimental Marine Biology and Ecology, reveals strong patterns in turtle behavior associated with seasonal water temperatures (which have long been suspected but have proven difficult to observe). During summer, turtles in Shark Bay were highly active, spending most of their time exploring vast seagrass meadows, feeding, interacting with other turtles and keeping themselves clear of barnacles and algae by rubbing on rocks and corals (see article for video clips). When temperatures dipped in winter, however, turtles’ lives slowed to a crawl as they spent most of their time resting on the seabed and rarely came up to the surface to breathe.

While video analysis is ongoing, several other tidbits and video clips (Green Turtle Video 1) have emerged from this research. For example, green turtles in Shark Bay have a very broad diet consisting of seagrasses, algae, jellyfish and other invertebrates (unlike green turtles in the Caribbean Sea, for example, which eat mostly seagrass) (Green turtle eats seagrass, Video 2; Green turtle eats more seagrass; Video 3; Green turtle eats a sponge, Video 4). Loggerhead turtles feed on hard-shelled invertebrates and appear to be quite fond of blue swimmer crabs – but apparently need some practice at catching them (Loggerhead Turtle, Video 5). Limited rocky habitat in Shark Bay appears to be in high demand for resting and rubbing by green turtles, and sometimes things can get testy (Green turtle fight Video 6). And then there’s this clip of a tagged female loggerhead turtle spurning the advances of an interested male (Video 7) (who eventually decides to give up and try another day).

A valuable and evolving research tool, animal-borne video cameras continue to provide unique glimpses into the lives of poorly understood, and often imperiled, marine wildlife.  Check back later for more on our turtle-cams and the other species we are working on!  For now check out this video of a green turtle swimming past a cow tail stingray.

A trip to the Red Sea, Rabigh Lagoon

I traveled to the west coast of Saudi Arabia at the invitation of Dean Mohammed Al-Jahdali (a marine biologist) to start a collaboration between biologists at King Abdulaziz University – Rabigh Campus and FIU’s Marine Science Program.  We are working to develop a project to restore and study Rabigh Lagoon and the surrounding waters of the Red Sea.

After a long but pleasant couple of flights, I arrived in Jeddah in the middle of a sandstorm (luckily it was nice enough as we flew over the Red Sea on the Egyptian side to have a great view of the desert and coast).

It’s the first time I’ve been in a sandstorm, but I am told that they are very uncommon in this area! Needless to say with the high winds and flying sand I was a bit concerned about getting out on the water eventually!  The drive north from Jeddah to the small city of Rabigh lasted about an hour and a half and was through pretty much constant wind and sand. I am very glad I didn’t have to drive! 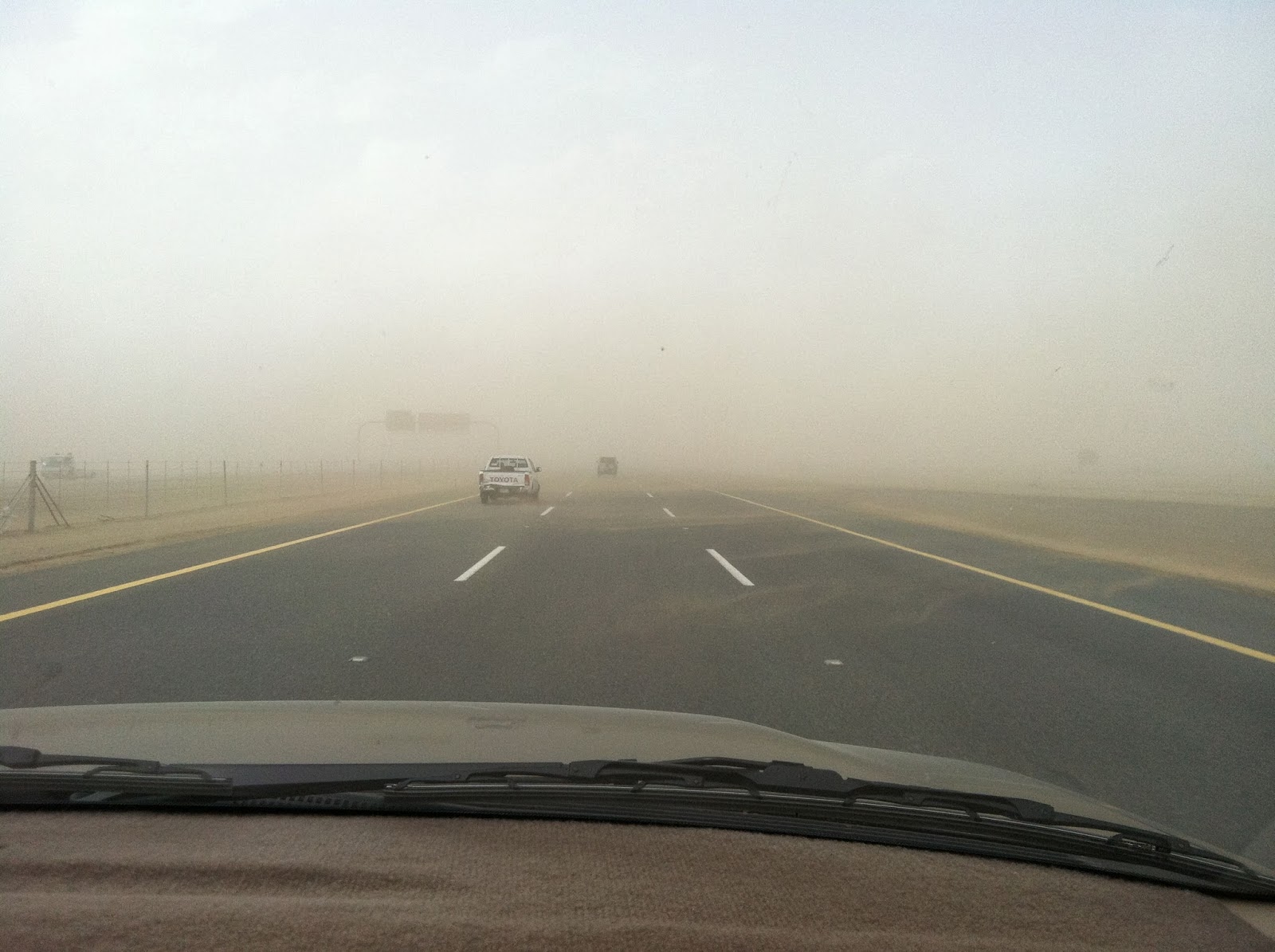 I spent the first day and a half talking to the scientists at KAU and touring their new campus and the city.  We had some amazing meals including fresh local seafood.  By the time we headed out to the lagoon I was really excited to see – and swim in – the Red Sea.   The trip was awesome.  We drove across hard-packed sand roads and encountered a large group of wild camels feeding along the shores of the lagoon early in the morning.  Once we left them, we drove along the shore of the lagoon and saw the roads that had blocked much of the flow of water from the lagoon to the Red Sea – forcing it through a single narrow pass until the government removed one of the roads just a few months ago.  Still, it looks like a couple of bridges to replace the roads with a couple pipes running through them would help the lagoon tremendously. 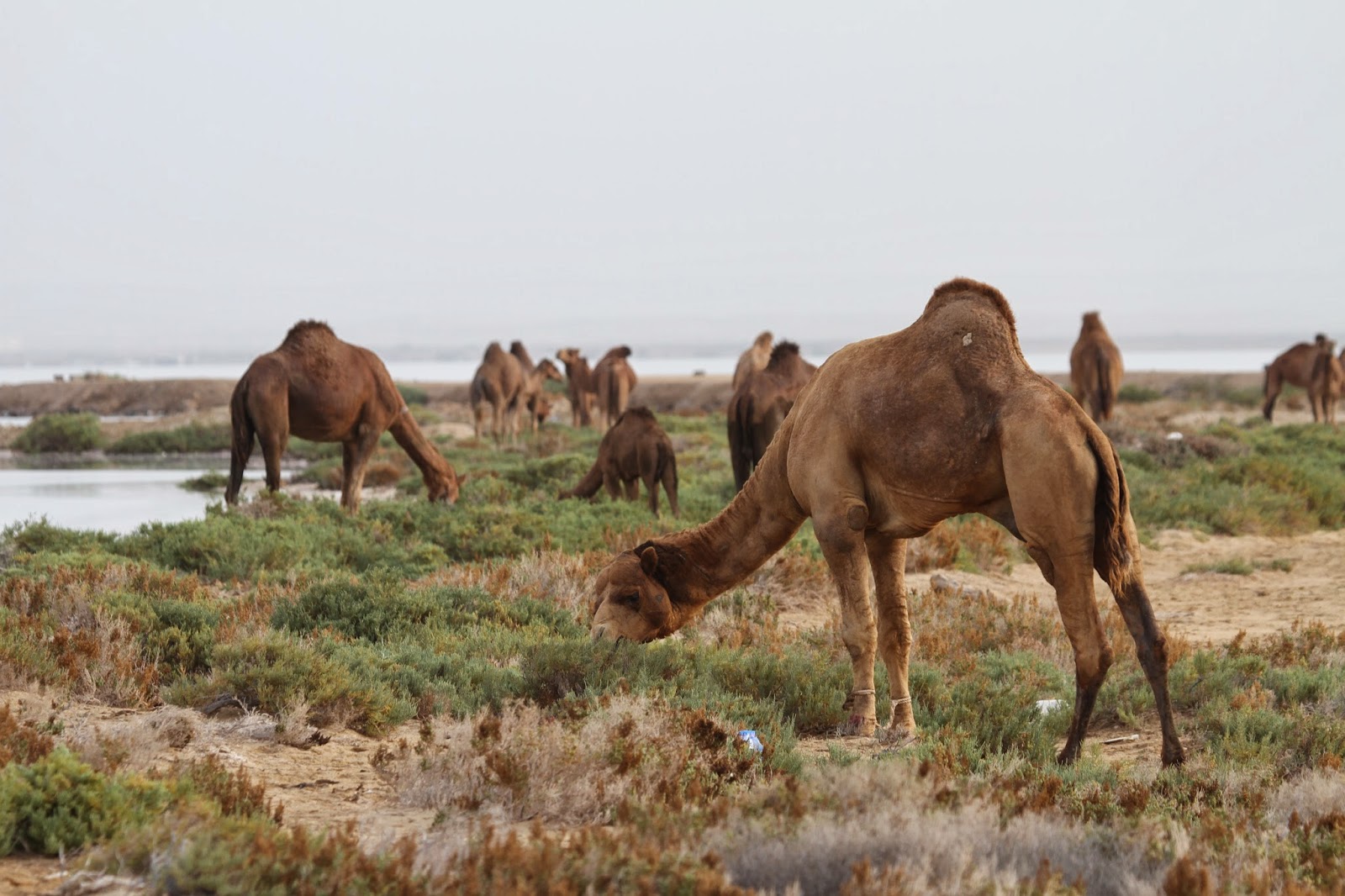 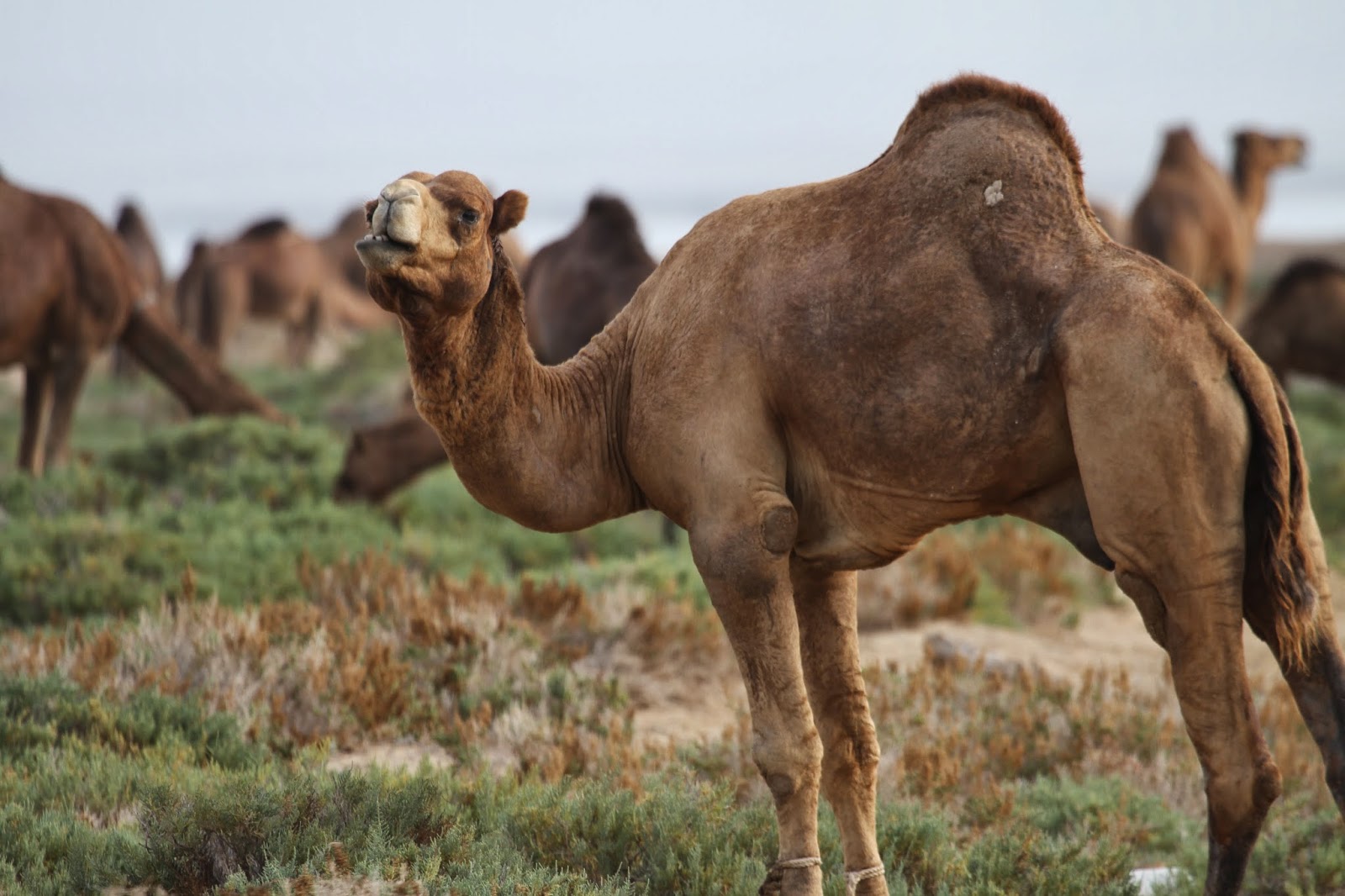 Based on a quick look around, there is no question that the lagoon could use some restoration work.  Although the corals, seagrass and mangroves near the mouth of the lagoon that has always been open look pretty good, those farther away are not faring as well.  Still, there is a good amount of live coral and with the newly opened waterway, there is a good chance for restoration to make a big difference while Dean Mohammed works to have more flow restored to the bay. 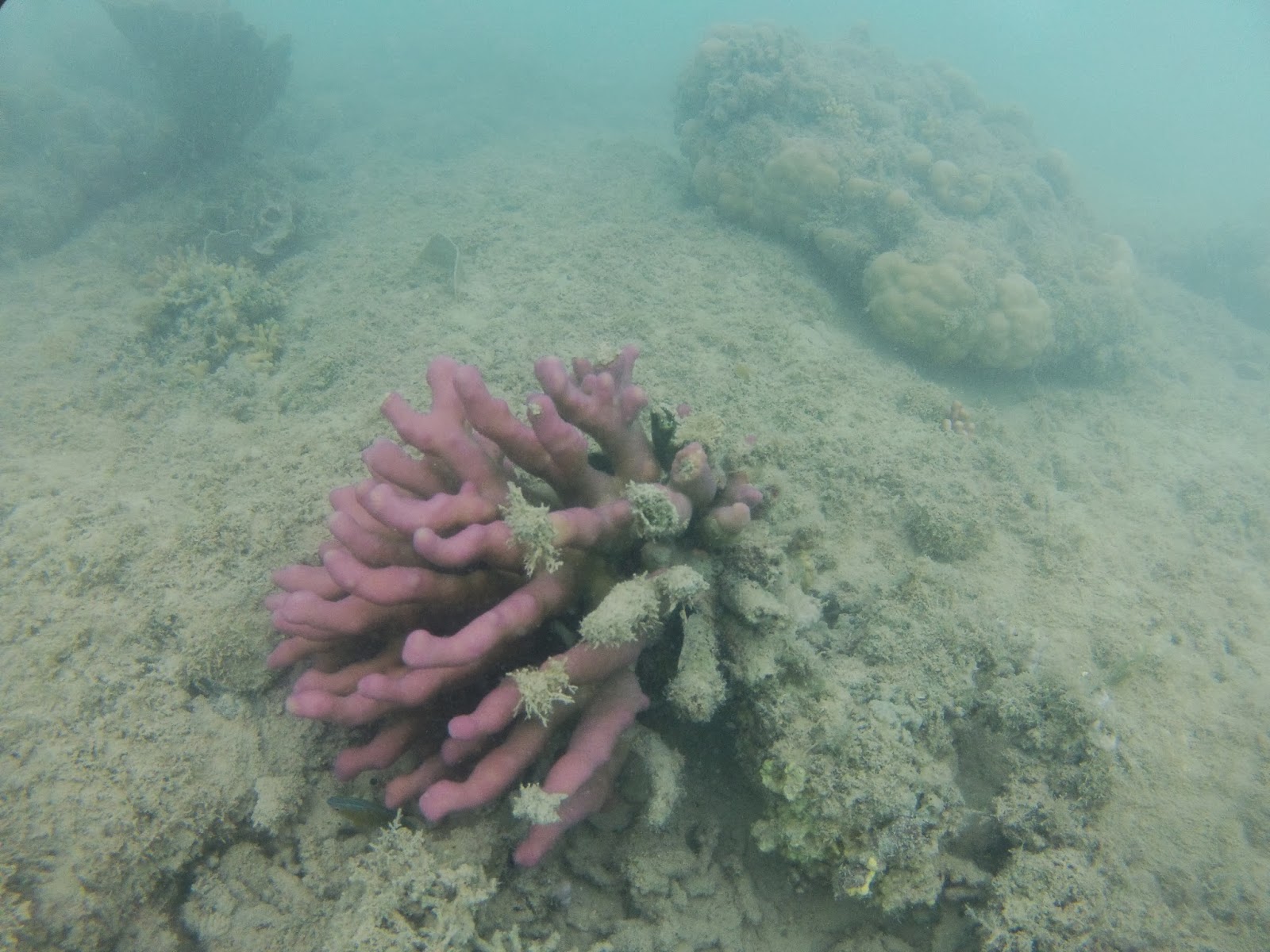 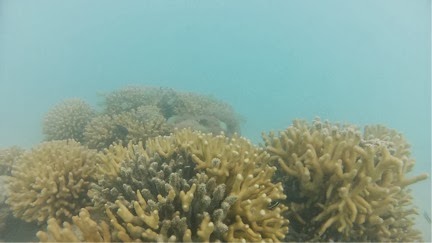 Towards the end of our tour we had a chance to quickly poke the boat out to the reef that lies along the open coastline.  We just went a few hundred meters offshore to the reef crest and I jumpped in.  It took my breath away.  The amount of living coral, the colors, and the huge abundance of fish was maybe the best I have ever seen!  Of course, Dean Mohammed said it was like watching black and white TV compared to other areas down the coastline a ways.  I can’t imagine what that would be like!  Eventually, I was coaxed back into the boat to head back to campus to discuss the project.  I am pretty excited about the potential for a team to do an incredible marine restoration project as well as some amazing science in a beautiful area. 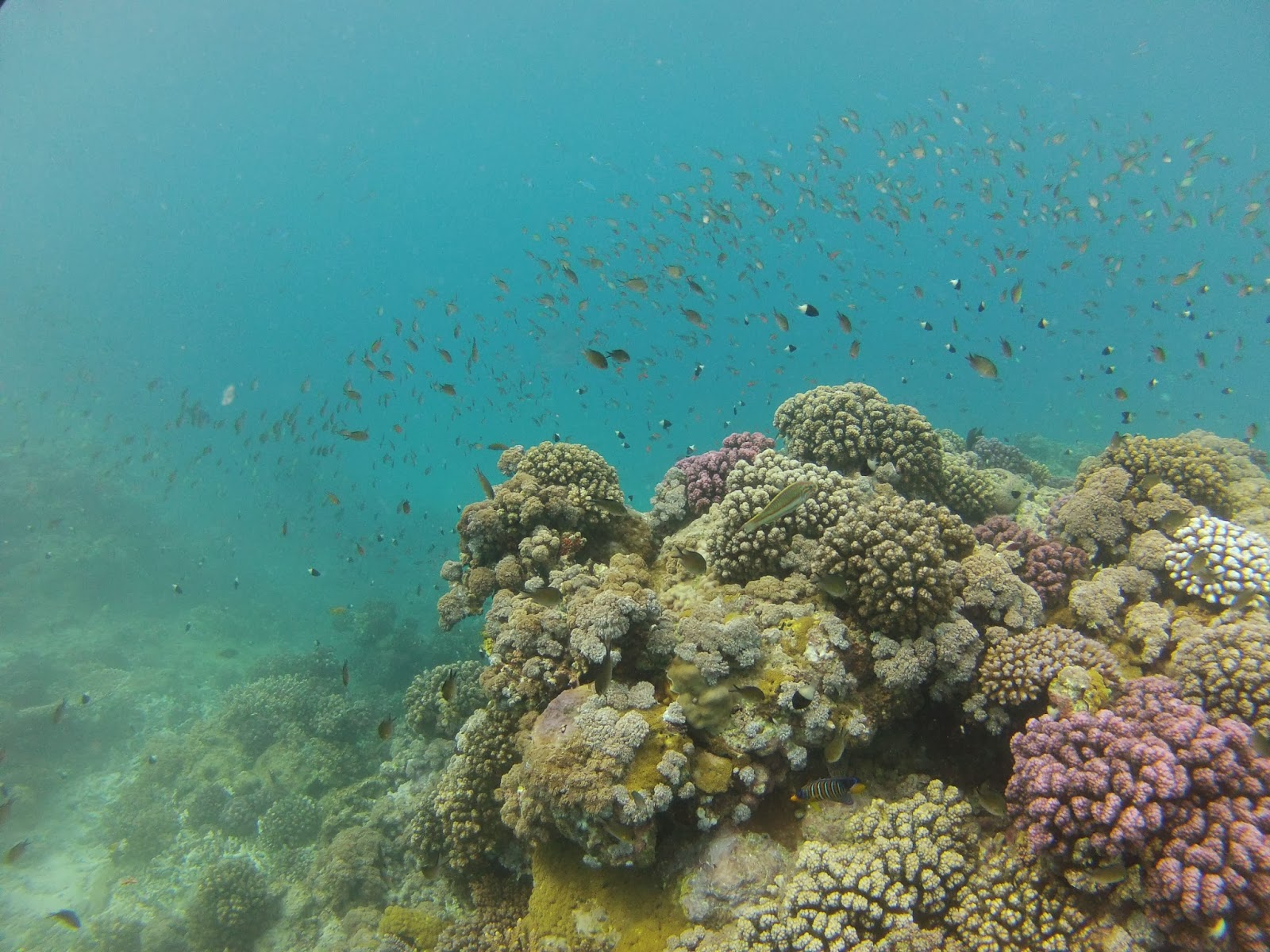 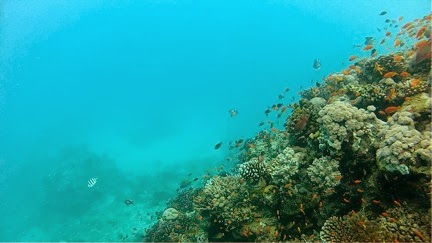 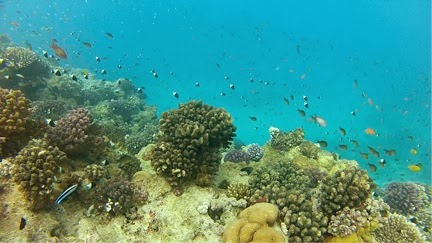 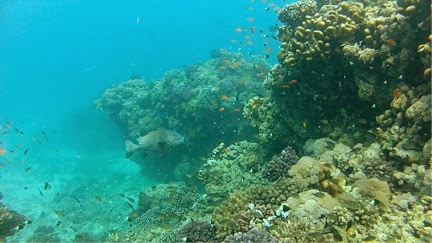 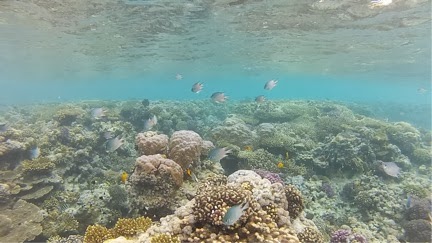 Posted by Heithaus Lab at 7:13 PM No comments: