With the Premiere of Shark vs. Dolphin: Face Off on Shark Week, I thought it would be a good time to write a little bit about the current state of the science.  I've been studying shark-dolphin interactions for about 20 years.  Most of my work has been in Shark Bay, Western Australia (www.sberp.org) where I investigated how often tiger sharks attacked Indo-Pacific bottlenose dolphins and how dolphins changed their behavior to reduce their chances of being attacked.  This led to studies of the influence of tiger sharks on the whole ecosystem.  You can learn more about that at the Shark Bay Ecosystem Research Project webpage.  We put together a video-based lesson for K-12 classrooms that lets students join the work that you can get here. Below are answers to a couple of the most common questions I get.

Do sharks really eat dolphins?  How do we know sharks attack dolphins?

The threat that sharks pose to dolphins is greater than we once thought. Most shark species won’t attack dolphins, but there are some species that do! Although it is very rare, people have seen and filmed dolphins being attacked by sharks.  That means that we have to use other methods to figure out how big a threat sharks are to dolphins.  We can see if particular shark species have dolphins in their stomachs or use chemical markers in the blood or muscle of sharks to see if they have eaten dolphins.

These methods don’t tell us if the sharks attacked a living dolphin or if they ate one that had died already.  By using the scars on the bodies of dolphins that are left behind after an attack, we get an idea of how many dolphins are attacked and, sometimes, what species of shark attacked the dolphin.  In our work in Shark Bay, we found that more than 70% of Indo-Pacific bottlenose dolphins have scars from shark attacks and probably 10% of the population is attacked (but escape) every year!  Around 20% of spotted dolphins in Bimini, Bahamas has shark-inflicted scars and around 30% of common bottlenose dolphins have evidence of shark bites in Sarasota, Florida and Morteon Bay, Australia.  In many locations, shark attacks are very rare.  This could be because populations of large predatory sharks have declined in many parts of the world.

What sharks are a threat to dolphins?

Not all sharks are a threat to dolphins and only a few species are probably a regular risk to them.  Within these species, only large individuals will attack dolphins.  Tiger sharks, bull sharks, and white sharks are at the top of the list. Sixgill and sevengill sharks also are likely to take dolphins. Hammerhead sharks, oceanic whitetip sharks, dusky sharks, and mako sharks might occasionally attack and kill dolphins, but it is likely rare and only very large individuals that do so.  The cookie cutter shark is a species that attacks dolphins, but won’t kill them.  Instead it scoops out small bites of blubber and skin, leaving a mark that looks like a cookie cutter made it.

How do dolphins avoid being attacked?

Even for shark species that are major threats to dolphins, it is unlikely that they go too far out of their way to try to eat dolphins.  But, dolphins will make major changes to their behavior in order to reduce the chances that they are attacked!  The success of these anti-predator behaviors is probably one reason that dolphins aren't found in diets of sharks very often.

The best way for dolphins to avoid an encounter with a shark is to spend their time in the safest places.  This is what we found for dolphins in Shark Bay.  When there are very few large tiger sharks around, many dolphins feed in shallow waters where most of their food (fish) is found.  When the number of tiger sharks increases, these sharks concentrate their foraging in shallow habitats, where there is a lot of prey (other than dolphins).  In response, dolphins shift to feeding more in deep waters that may have less fish but are safer.   In Hawaii, Hawaiian spinner dolphins feed offshore at night and then come into shallow bays with white
sandy bottoms to rest during the day.  This minimizes the chances that the spinner dolphins run into sharks.  Many dolphins live in large groups, which likely help to increase the chances that predators, like sharks, are detected.  Living in groups can also help reduce the risk to a particular individual because groups can confuse attacking predators.   Some species of dolphins form big groups with other species of dolphins.  These "mixed-species groups" probably help further reduce the risk of predation without greatly increasing competition for food since the species in such groups generally have different favorite foods.

If a dolphin does run into a shark, their best defense is speed and maneuverability.  Dolphins are much more maneuverable than most sharks so they are able to keep out of the way once they see a shark. Dolphins also are faster over the long haul. In Shark Bay, we saw a white shark approach a group of dolphins that didn’t see the shark until the last second.  Even though the shark didn’t attack, the dolphins scattered and leapt away from the shark for a long time before slowing down!  Sometimes, dolphins may group together to “mob” a shark, much like small birds will do to a hawk.  They harass the shark until it swims away.  This behavior has been observed in several locations around the world.


Can a dolphin kill a shark?

They can. Smaller dolphins - like the well-known bottlenose dolphin - will attack and kill small sharks occasionally, but sharks are not a part of their diets.  Accounts of dolphins killing large and dangerous sharks by ramming them in the gills have not been verified.

Some populations of killer whales (yes, they are dolphins), eat sharks, and can even kill a great white shark.  Off New Zealand, killer whales eat many rays and sharks.  Off the western coast of North America, there are several types of killer whales.  "Resident" whales eat fish like salmon while "transient" killer whales eat marine mammals including seals and sea lions, dolphins, porpoises, and whales.  The "offshore" whales are not as well known and appear to eat a large number of sharks, especially Pacific sleeper sharks which live in fairly deep water.

Selected other publications on shark-dolphin interactions: 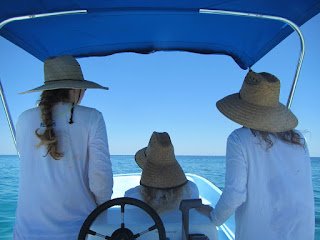 The past week in the beautiful Abaco, Bahamas has been a whirlwind to say the least. Beth Whitman and my fellow members of her intern army, Liberty Boyd and Ryley Parent, began building and deploying BRUV (baited remote underwater video) units for the Global Fin Print Project (https://globalfinprint.org/) on the outer reef. We also ventured out to scout sites for Beth’s study of green turtle foraging behavior and distributions. We checked out a couple of bays for ideal seagrass coverage in order to eventually conduct green turtle, shark (predators) and seagrass (food) abundance surveys. Once we reached our destination of Water Cay (about 20 minutes away), we interns had a crash course on scientific names for local seagrasses and algae and practiced the Braun-Blanquet method for rating abundance.

The next couple days had a very early start to them in order to take advantage of the perfect weather conditions. On the first day e set out with the assistance of Stephen Connett, a turtle researcher, and a volunteer from The Bahamas National Trust to go deploy as many BRUV units as possible (tagging sea turtles after was our reward). After almost 11 hours on the water we deployed twelve BRUV units! After the BRUV deployments, we mustered up the last bit of energy we had for the day to have Stephen take us to a shallow part of Scotland Cay to go find some turtles. We managed to capture, tag and release three green turtles; the largest one being ~26 kg.


The next day was BRUV day round two and we managed 12 more deployments! We learned that chicken wire can slice your hands faster than you can say ouch, and sometimes you have to almost fall off the boat in order to get a good picture (cough cough, Beth). 8:30 PM is a very ideal bedtime in case anyone was curious about the riveting life of a scientist. Overall a great first week of work down here!