Well the weather wasn’t kind to us on the last day for Linda and I.  We were going to do some quadcopter work but the wind was blowing 25 knots…at least…making conditions bad at best.  We did get in a little bit of snorkeling when we went out to check the conditions. We saw lots of sharks and rays and got some identification pictures for Johann…and then came across a humpback whale and calf inside the bay (a nice birthday present for Jeremy!).  The humpbacks are here for breeding and will travel south for the (southern hemisphere) summer to feed.  We were lucky enough to spend a bit of time with a mother and calf.  They were both pretty animated at times and we got to see tail slaps, pectoral fin slapping, a few spy hops and a couple breaches!  Truly amazing!  They even came close enough to see them underwater.  Last night when Johann and Jeremy were retrieving the cameras they could hear a whale singing in the distance!

Below are some pictures from the monitoring cameras and our snorkel.  Linda and I head back tomorrow but Johann and Jeremy have another three weeks of work.  We won’t keep up the daily updates for now but we will put together some highlights of the research.  Also look out for project based videos for elementary and middle school classrooms in the next couple months … and research results as soon as we have ‘em! 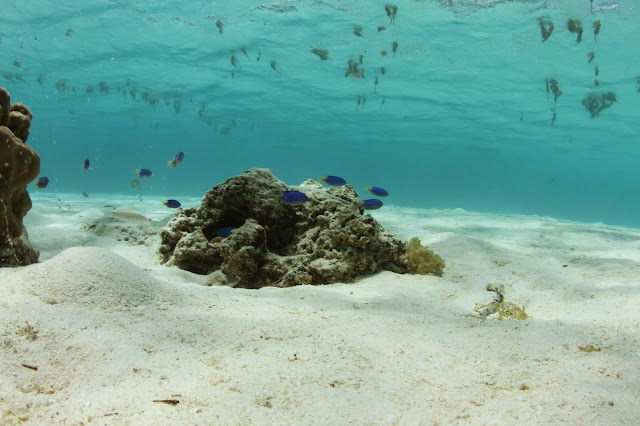 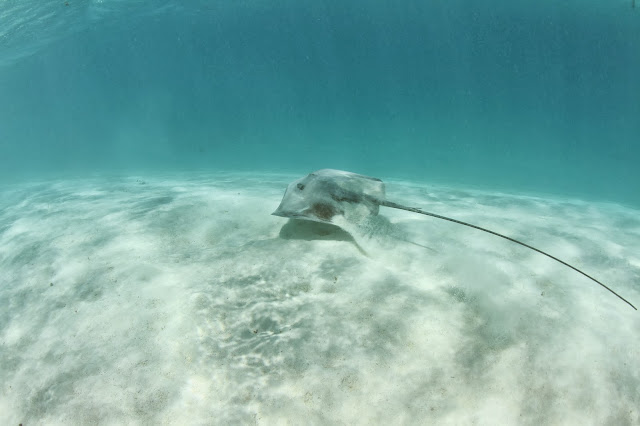 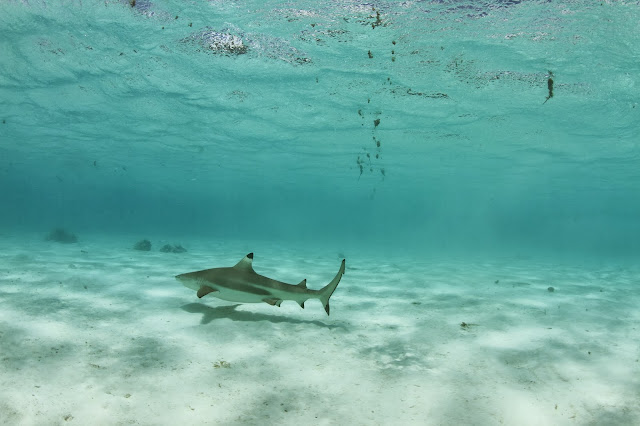 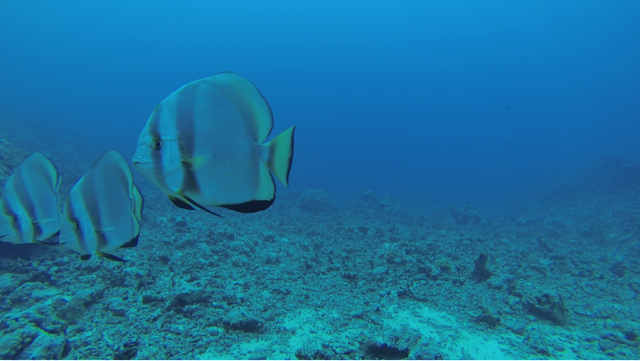 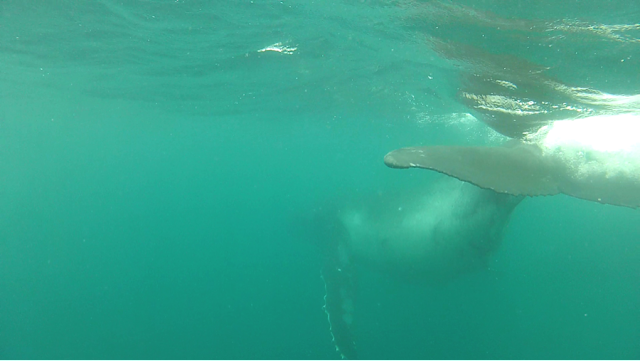 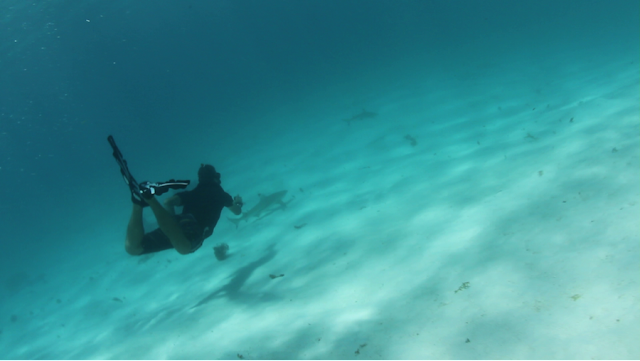 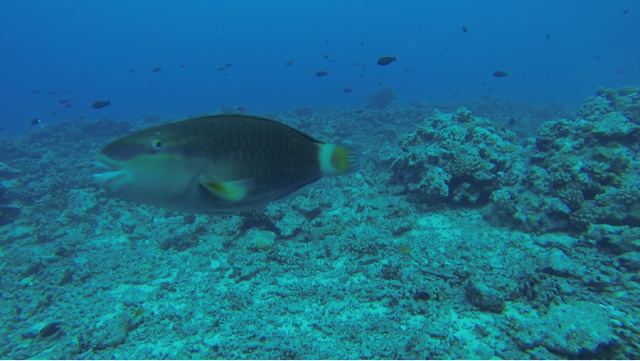 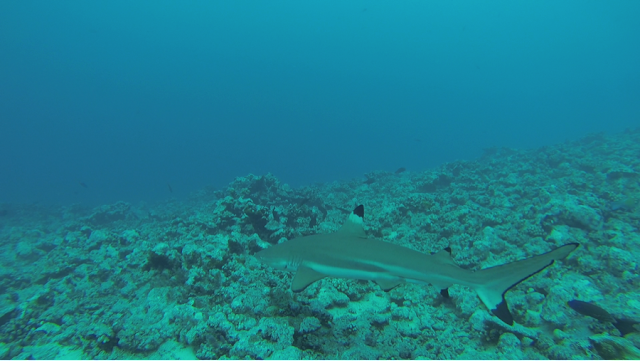 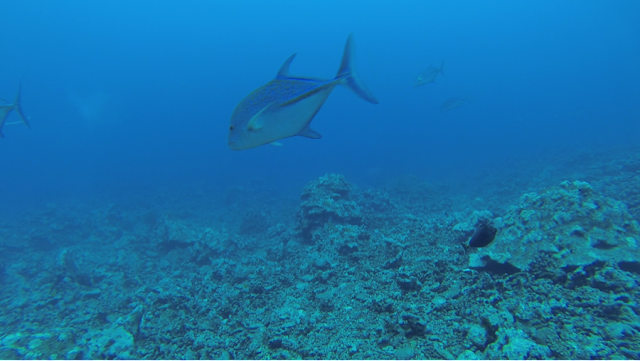 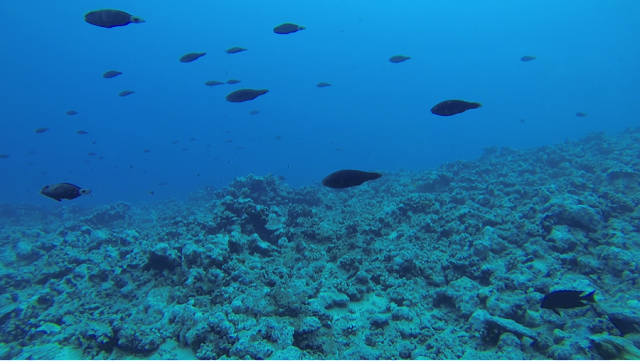 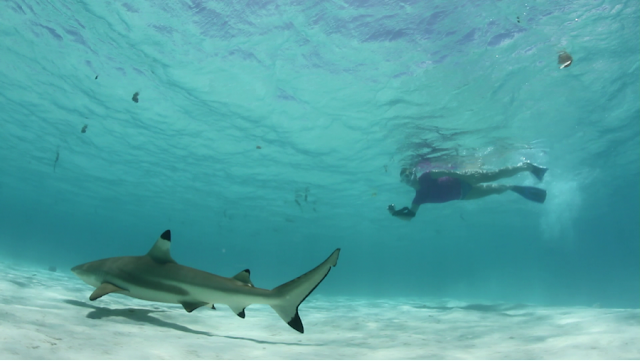 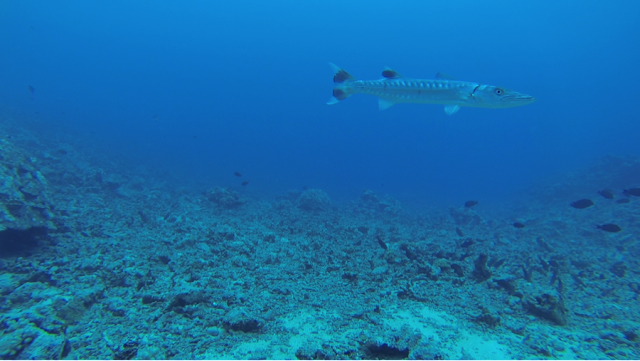 Posted by Heithaus Lab at 4:33 PM No comments:

It was another great day of work in Moorea today!  We started out early, setting the stationary cameras again.  Finding the stakes was a bit trickier today with seriously reduced visibility!  But, Johann and Jeremy made fast work of it, and we soon ducked inside the lagoon to try to catch a blacktip reef shark to deploy the shark cam.  I still wasn’t totally happy with our design so while we waited for the sharks to show up (which took them what seemed like forever) I worked on it.  In the end, I was pretty happy with the field fix and I am now confident that the camera will come off when it is supposed to and that we have absolutely minimized the drag.  Even better, the new design puts the camera right in front of the dorsal fin so it isn’t causing drag on one side of the animal but not the other.

For a while it looked like the sharks were going to win again today.  Four sharks came and went, sniffing the bait and then leaving, for more than an hour before a big female finally bit.  Jeremy got it to the boat and we quickly measured it, took identification photos and samples, then put the camera on.  The release went smoothly and the camera rode perfectly on the shark.  She showed no reaction at all to the camera, slowly cruising away.  Unfortunately, my desire to make sure the camera came off was a bit over-zealous and it detached before the dissolving link was gone.  However, the video showed that the system will work and I am really encouraged by the lack of reaction to the tag.  One more set of tiny tweaks to the attachment and we will be in serious business!!

After getting the camera back it we returned to CRIOBE to refill tanks.  Jeremy and Johann headed back out to get the stationary cameras and Linda and I managed to squeeze in a snorkel since our days are disappearing fast!  The fish life on the snorkel was amazing.  The diversity is wonderful to see and although the coral isn’t what it used to be before the cyclone and the crown-of-thorns starfish outbreak there are signs of a robust recovery everywhere!  We did have one entertaining encounter with a triggerfish that decided it did not like us in its territory…or really didn’t like it’s reflection in the camera lens!

In the early evening we planned to head out to a nursery area but the weather thwarted us again.  That’s the breaks of fieldwork though!

Posted by Heithaus Lab at 11:27 AM No comments:

Before I get to the sharks…er or attempt to work with sharks…I give you a photo of our alarm clock!  Now…the myth is that roosters wake you up at dawn.  Well, here on Moorea they aren’t bothered by technicalities like daylight…5am and dark is fine for them.  And 530.  And 0600, but by then we are up and having coffee anyway.

Well, you can’t win ‘em all!  We had a beautiful start to the day and were poised to catch a shark to deploy our shark-cam.  But, before one of the three sharks circling the bait could take it a large tourist boat came over and anchored right next to us.  We tried to find another spot, but we couldn’t catch a shark before it was too late in the day to deploy a camera.  We’ll give it another go tomorrow!  We did, however, have a really nice test flight of the quadcopter.  The ‘copter has a video camera mounted to it and we will be able to use it to assess shark abundances on the shallow reef and in nursery areas.  Today was about making sure we could retrieve it from the boat and picking the best speed and altitude to fly!  The test was a success and involved no unintended plunges into the Pacific Ocean. 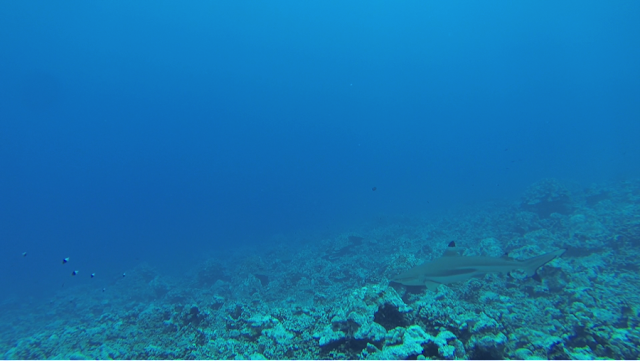 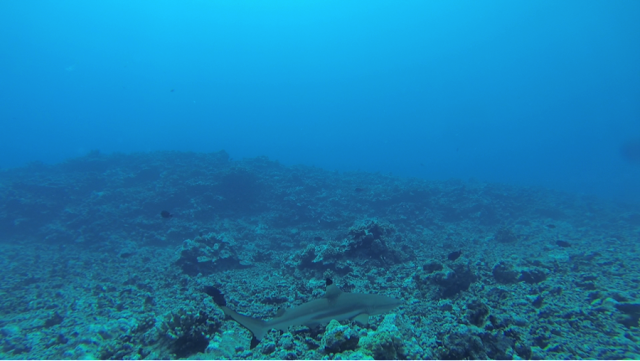 So, after a fairly slow afternoon today, we will have an ambitious plan for tomorrow.  Of course, that assumes that the rain slows enough to see more than four feet in front of you.  Anyway… the plan is deploy the stationary cameras, catch a shark to deploy a shark cam and collect samples, collect samples from other sharks, retrieve shark cam and stationary cameras, go to a nursery area to sample, then collapse.    There aren’t a ton of days left for Linda and I so we need to pack them full!  Of course, the work will continue for another month with Jeremy and Johann…and hopefully for years after that!
Posted by Heithaus Lab at 9:21 PM No comments: 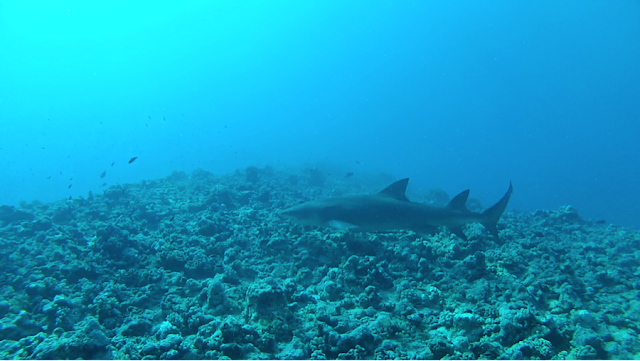 Posted by Heithaus Lab at 11:16 AM No comments: