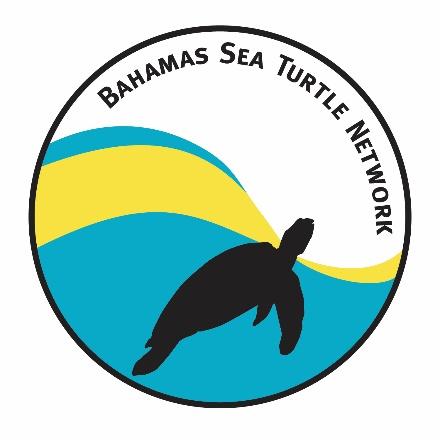 Facebook page: Bahamas Sea Turtle Network
As of August 1st, the Facebook page has received 48 observations. We have had reports of significant nesting in Grand Bahama and Abaco, several strandings, slaughtered turtles in Abaco and San Salvador, and two brave rescues of turtles captured by local fishermen in Sandy Point Abaco. It has been very encouraging to have so many new people involved in turtle conservation.

Since the Loyalist days in the 18th century, the Abacos have been famous for turtles. Years ago Harold Albury, an old friend from Cherokee, told us stories of the days when he was a boy fishing on a sailing smack boat with his uncle who harpooned turtles. There are excellent turtle habitats all through the Abacos, and the people ate them regularly right up until the ban in 2009. Now we are learning that there is considerable illegal harvest, especially in Sandy Point and the northern Abacos. 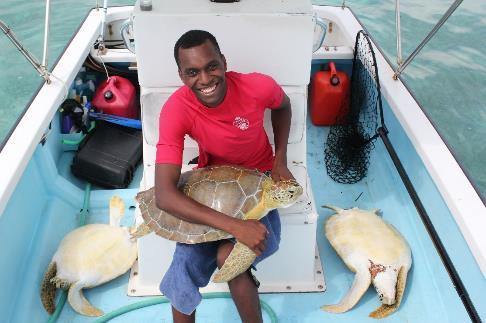 On June 12th Kranston Simms, a BNT volunteer, joined me in Spanish Wells to tag a few turtles and then run up to the Abacos. Kranston is volunteering for BNT while he is waiting to go to sea for 18 months as part of his training at LJM Maritime Academy in Nassau. On the 13th we tagged seven green turtles around Spanish Wells, then got up early the next morning and cleared Ridley’s Head at “day clean” for the trip up to Abaco. We went through the cut by Little Harbour and still had time to run another 15 miles to Marsh Harbour. I had reserved a mooring from the Harbour View Marina, and that turned out to be a blessing.
I also called Beth Williams who is a PhD. Candidate at the Heithaus Lab at Florida International University (http://faculty.fiu.edu/~heithaus/). Beth and her three interns were living at the Kenyon Centre for Research at Friends of the Environment while she conducts her research. Her main project is studying sea grass, but she is also conducting BRUV (baited remote underwater video) surveys for Global FinPrint (https://globalfinprint.org/). These surveys consist of setting baited video cameras in 15-25 feet to film sharks on the reefs on the eastern side of the Abaco cays. This is part of a global survey.
The day after Kranston and I arrived in Marsh Harbour we went out to follow Beth and her crew to help set and retrieve 12 BRUV rigs. As it turned out, Beth was fine without us, so we lent some moral support and took photos of the operation. 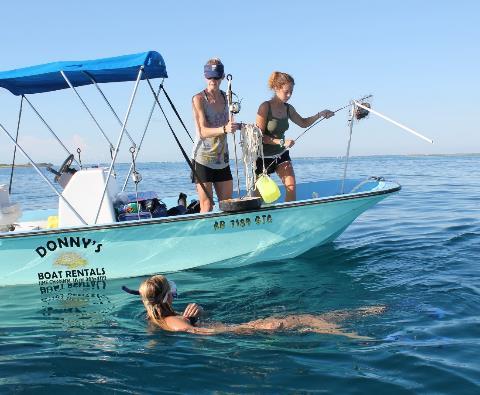 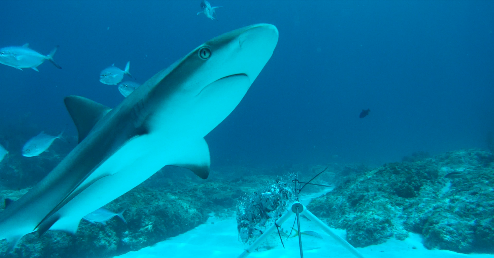 Reef shark filmed by the BRUV. Notice the bait in the background.
By noon Kranston and I were getting restless, so we took two of the interns, Liberty and Ryley, into the cut north of Scotland Cay where I had tagged turtles several years ago. We caught two green turtles then rejoined Beth, dropped off Liberty and Ryley and picked up Laura. Beth agreed to meet us near Scotland Cay when she was finished retrieving her last BRUV. By then we had caught one more turtle and were happy for the help measuring and tagging. The Scotland Cay habitat is beautiful with clear water, plenty of grass, healthy turtles, and winter residents to protect them. 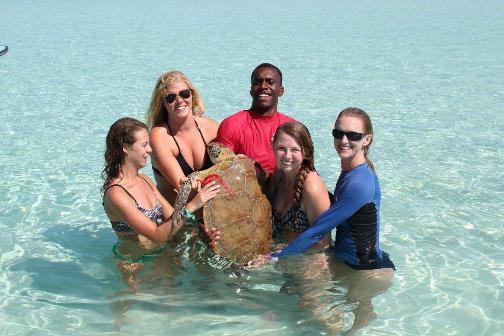 Kranston, Beth Whitman, and her interns at Scotland Cay
As we entered the channel into Marsh Harbour our outboard made some ugly noises and shut down. I checked all the usual suspects, but found nothing wrong. After we fiddled for several minutes the engine decided it would start, and we idled back to FOXY LADY with Beth following us in her whaler. By then I was pretty well convinced that it was a stripped gear in the lower unit.
The next morning I talked to Jamie Malone, the Suzuki dealer in Marsh Harbour, who did not have parts, so I called Ron Pinder in Spanish Wells who arranged to send a used lower unit that I could use for the rest of the season. Between Ron, Portia Sweeting handling transport in Nassau, and Jamie installing the gear I was up and running again in three days. Good to know people who will take care of you.
On the 18th I carried Beth’s interns to Snake Creek for a really good day of tagging. After some time figuring out the creek we tagged eight turtles. Unfortunately 5 turtles had fibropapilloma tumors. 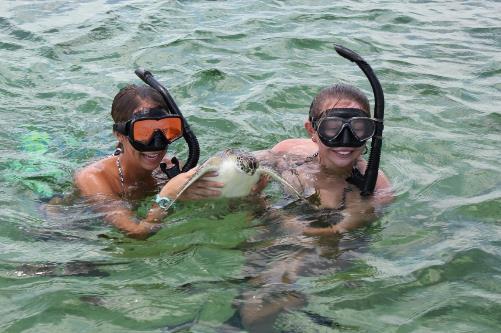 Ryley and Liberty dive up a small green in Snake Creek

After three days at the mooring in bad weather I went up to Hills Creek with Keith Bishop’s daughter-in-law and grandchildren. It was cloudy but we caught six green turtles. Five of the six had tumors. The turtling was fun, but it was tough for the kids to deal with the tumors, and I was afraid that they would lose interest. But they started asking very good questions about the disease. I was impressed. Maybe someday one of the students we carry will solve the mysteries of fibropapillomatosis. 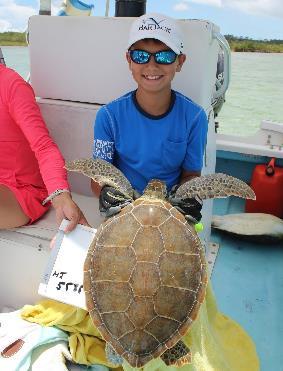 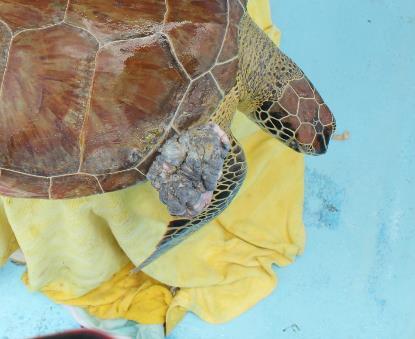 The next day interns Ryley and Laura helped me move FOXY LADY down to the anchorage off Tilloo Cay. From there it was an easy run in the speed boat to Snake Creek, and I would be ready to move down to Cherokee the next day. We were in the creek looking for turtles by 1000. Brian Higgs who had worked with me several years ago joined us for the day. Brian lives in Abaco and is college bound at the end of the summer. The tide was high so we were able to chase the small turtles in the flats near the boat ramp. We caught three, one of which was kyphotic. That is the second kyphotic we have caught in 10 years (approximately one kyphotic turtle per 1,000 green turtles). The hump reduces the individual’s hydrodynamic efficiency, but otherwise the turtles are fine. They are even said to be able to reproduce successfully. 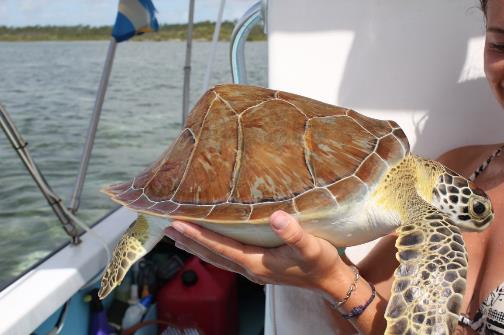 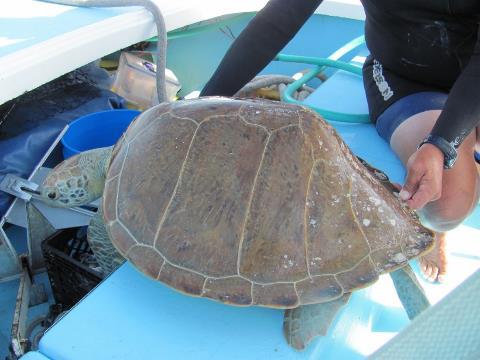 Kyphotic turtle from 2010 in Crooked Island

The ladies could only work with us until Beth arrived at 1130, then Brian and I were on our own. Not a problem. Brian is the son of a commercial fisherman and runs eco tours in Snake Creek. He took me to new places in the creek with plenty of turtles. We caught 10 turtles on the day and none had tumors. Obviously we need to spend a lot more time in Snake Creek.
Ryley Parent, one of Beth’s interns, is giving turtle conservation a boost by starting a turtle-free restaurant program. Restaurants that commit to never serving turtle will post a turtle-free sign and get their name listed in the press. Ryley has already had success with the tourist restaurants. Now she will brave the restaurants that serve a more exclusively local population. It is rumored that some of these restaurants still serve turtle meat despite the ban. 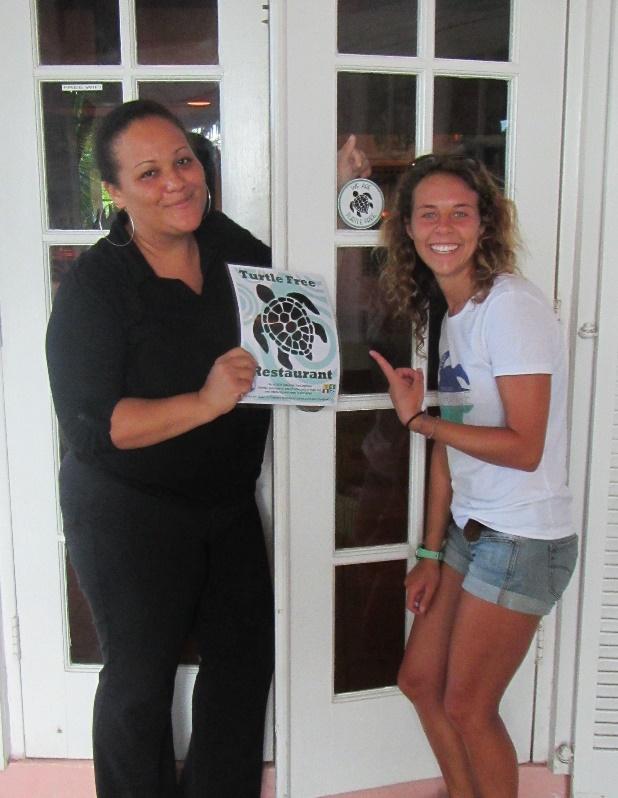 Ryley at a Marsh Harbour restaurant
The next morning I picked up Brian who would pilot FOXY LADY up the shallow channel to the small anchorage off Cherokee. Unfortunately, the bottom is like a concrete slab, so we set two anchors in patches of grass, and I dove to set them, but there was no way they would hold in a breeze of wind.
Cherokee Sound is a very special place with miles and miles of flats. The boys in Cherokee understand shallow water, and their definition of a channel is any place that has two or three inches of extra water.
Cherokee is a beautiful loyalist settlement that, “one time ago,” was a major fishing and boat building community with close ties to Spanish Wells. The settlement is small and remote though there is now a good road that reaches the settlement. Cherokee Sound has been badly overfished, so there are only a few men who still fish commercially.
Before he left for the day, Brian introduced me to his friend, Tim Sands, who talked to his cousin who would loan me his mooring. The next morning I picked up Tim and his son, Branden. Branden swam around, dove up the mooring and we moved FOXY LADY. We only had inches under us at low tide, but the mooring was heavy and secure.
Then we took off to find some turtles. We scouted around a bit at low tide and wound up spending most of our time in Big Mangroves where we caught a good selection of green turtles, and all the turtles were tumor-free.
Tim Sands was ready to go with his whole family after church on Sunday, and I was happy to have the morning to rest up. What a lovely family! We went to a new area, and everyone caught a turtle, and again, no papillomas. 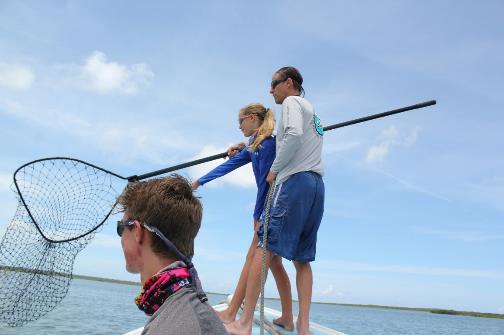 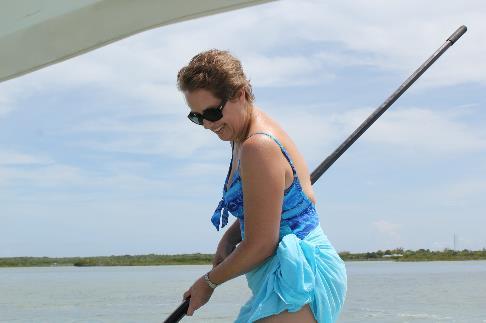 Soon after I dropped off the Sands, David Knowles, the head BNT Warden in Abaco, drove Elijah Sands (no relation) down to Cherokee from the Marsh Harbour airport. Elijah was going to start work at BNT in ten days, so he had time to work with me in Cherokee and then make the trip back to Spanish Wells.
In the early evening Elijah and I went ashore to attend a town meeting that would discuss the proposed marina in Little Harbour. The representatives of the developer, the Abaco Club in Winding Bay, were prepared and persuasive; but many of the foreign residents of Little Harbour were angry. They want their harbour to keep its funky feel. It was a classic conflict. My guess is that the developers will get their marina, but not easily. 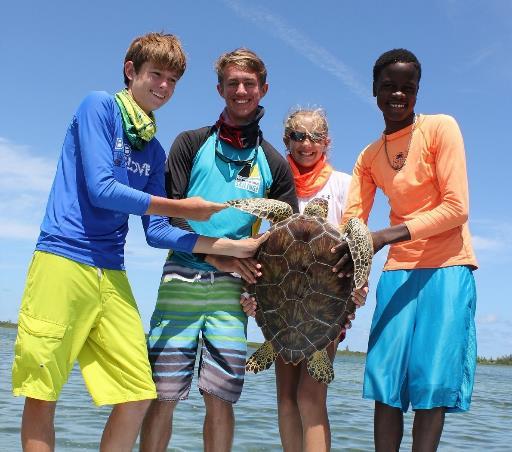 Josh, Branden, Rachel, and Elijah
Monday was one of those magical days. Branden and Rachel Sands brought their friend, Josh, to go along with Elijah and me. All the kids were enthusiastic and good in the water. Branden guided us around in the northeastern part of Cherokee Sound and we caught 13 turtles, all healthy. I knew it was a really good day for the kids when I heard from Tim Sands that Branden had admitted when he got home, “I THOUGHT I knew a lot about turtles.” 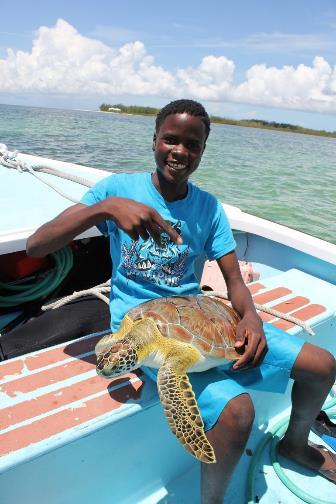 Elijah Sands with green turtle in Cherokee Sound
On our last day we had to wait for the afternoon tide, so after checking the engine and tying down all the gear, Elijah and I went out to look for a manatee in Casuarina creek. We saw a huge school of bonefish but no manatee. The locals said they had not seen it for a long time. I reported that to Diane Claridge, and then Elijah and I went off to tag two turtles before we had to get back to the boat.
We made it out the channel by 1500 and had an easy run down to Egg Island. In the Egg Island channel we almost ran into a small barge on stilts that was taking core samples for the proposed Disney project to develop Egg Island as a cruise ship destination. Spanish Wells is gearing up to fight tooth and nail against the project.
We anchored for the night and the next day off the Bluff and moved into Muddy Hole on Thursday. Elijah took the fast ferry that afternoon saying, “I will be back,” and I stayed on for a couple of days to lay the boat up for the summer.
The Abaco trip made a very successful finish to the season. We tagged 58 green turtles, surveyed three areas for fibropapillomas, spent time with the Fisheries Officer for Abaco, helped Ryley Plant with her turtle outreach project, and made a lot of good contacts.

GOOD NEWS
On July 22 the “Nassau Tribune” printed a statement from Disney saying that they would not develop Egg Island. Disney said that the project would cause too much damage to the environment. I would bet that the outcry in Spanish Wells influenced the decision.
Not sure what the future holds for Egg Island but hopefully a Spanish Wells group will get a 99-year lease on the cay or it will become a national park.
Posted by Heithaus Lab at 7:32 PM 8 comments: