Today was another amazing day on Moorea.  There wasn’t a breath of wind when we woke up and after organizing gear we were slipping under the bridge – more like squeezing through a tunnel (check out the picture … I am not kidding) - and were out on the bay.  We started out testing the shark-cam.  First step – make sure it floats.  That worked.  Second step – make sure we can hear the VHF transmitter from far enough away.  The VHF sends out a ping that we can hear with a special antenna and receiver that lets us figure out the direction to the transmitter.  Since we won’t be tracking the sharks while they wear the camera, we need a good range or else we might lose the camera.  Luckily it worked great and we had a strong signal more than 3 miles away so we should have no problem finding the package after it comes off a shark.

During the test we ran into a group of spinner dolphins.  There were a couple dozen around and some came over to ride on the bow wake of the boat while others were busy socializing and jumping out of the water, spinning.  The spinner dolphins here spend their days in the lagoon resting and socializing then head out to deeper waters to eat small fish and squid at night.

We were hoping to catch large blacktip sharks today for several studies.  First, we wanted to deploy the shark cam to see what we might learn.  Second, we wanted to flush the stomachs of sharks to determine what they had been eating.  Third, we wanted to collect blood samples and small clips from fins.  These samples will be used for genetic studies and “stable isotopes” which help us determine where and what the sharks might be eating.  They also give us an idea of whether they eat the same things all the time or if their diets switch as well as how different the feeding habits of different animals might be.  One of our big interests is how different the behavior and feeding is of sharks that visit sites where they are fed by people compared to sharks that don’t live in these areas.

We started chumming in an area far from the shark feeding site.  We hung a fish head over the side and waited.  After about 15 minutes we saw sharks over the shallow reef chasing fish.  Three sharks were near the surface, their fins out of the water, chasing schools of fish that were jumping to get out of the way.  Unfortunately, they were up-current and had no idea we had bait in the water.   It wasn’t too much longer before a ray showed up and then several blacktips.  We threw a bait to the sharks but we had to keep pulling it away from the ray.   It took a while because the sharks would turn away from the bait at the last second, but we eventually captured a shark - an adult male.  We quickly measured it, collected our samples, and Johann took a picture of its fin.  It turns out you can tell individuals apart by the markings on their fins because they are unique and don’t change over time.  When I tried to put the camera on we realized that we’d have to make some modifications to our soft clamp that holds onto the fin.  Clamps are great – you don’t need to put a tag into the shark – but you have to get them just right or they fall off. It turns out that blacktip fins are a lot thinner than we had thought!   The whole process took only a couple minutes and the shark was back in the water and swimming away powerfully.

We caught a second adult male blacktip reef shark later in the day.  We were able to collect all our samples also flushed its stomach (kind of like they do with people at the hospital if it is needed).  Unfortunately, the only thing that it had in its stomach was the bait it had just eaten! 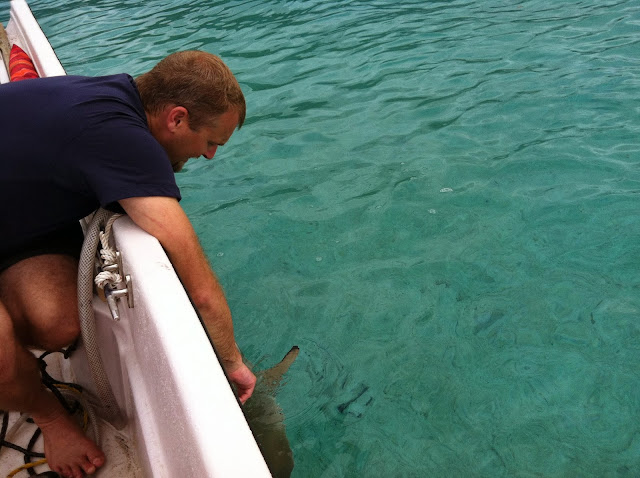 During the day we also tried to catch sharks near the shark-feeding site, but it turned out to be impossible.  The second a bait was in the water it was immediately devoured by a huge swarm of small triggerfish.  The blacktips had no chance!  Jeremy managed to throw tiny scraps of bait in the water to distract the triggerfish for a few seconds but they quickly made their way back to the bait so we had to move back inside the lagoon.

After we got in from the water we worked on gear and samples.  The shark cam is ready to go now…really it is, believe me.  Jeremy and Johann got the samples from the day processed and started working on the stakes for mounting cameras on the reef.  That will make it easy to get a nice sample of reef fish dynamics near and far from shark feeding sites.

We skipped the nursery area sampling tonight…the tides are way too low.  We will be back out at the nurseries in a couple of nights, though…including with our quadcopter that we are going to use to get counts of sharks.
Posted by Heithaus Lab at 10:15 AM