June 18th
This morning we had to introduce ourselves to the local authorities (water services) and request permission to enter the waters and start any research activities in the Ruvu River.  After meeting with a few of the people working at the District Commissioners office and having our heads spun from all the Swahili conversations, we ended up being directed to the office of Ndugu Jakaya Mrisho Kikwete, Bagamoyo’s Representative of The President of The United Republic of Tanzania.  He was very welcoming and after a few more formalities were exchanged in Swahili, the conversation changed to English so that we could be included.  We gave a brief explanation of the ecological assessment we hope to be able to conduct and stressed the importance of this work.  After a few more formalities he welcomed us to undergo our mission and wished us much success.  On our way out of his office he left us each with a handshake and the words “asante sana”, Swahili for “thank you very much”.

Now that we have been granted permission to start our research we can hit the water… after we get a proper boat sorted that is.  It just so happens that on our way into the Commissioner’s office we spotted a 5m fiberglass boat with a 75hp Suzuki.  Keep in mind that this is the ONLY fiberglass boat in the town of Bagamoyo and it is strictly used as a patrol boat by the local fisheries officer.  We enquired about the boat and organized to hire it.  We also hired a skipper, a local fisherman who knew the waters, and laborers.  It appears that we are all sorted!!!

After our productive morning filled with meetings and organizing logistics we went down to the beach to see what the local fishermen were landing with their beach seines.  Some of us even jumped in to help with the final haul!!!  Included in the catch were a variety of species including blue swimmer crabs, puffers, flatheads, grunts, tarpon, mackerel, sole, grouper, catfish, milk sharks, and a variety of sardines and herrings to name a few.  We noticed that all of the fish seemed small for their respective size potential and were probably using the near-shore seagrass habitat as a nursery.  We also collected a few seagrass samples (Thalassodendron ciliatum) that were snagged in the fishermen’s nets. We should definitely be able to get samples from seagrass (other species, other samples) and small fishes but also need to try and get as many predators and sharks as possible throughout the trip. We will also try to extend this sampling to freshwater and brackish communities.

In the last few hours of daylight we decided to give the inflatable a try, if nothing else to see the river and get an idea of the system we will be working in.  Our initial concerns about the small inflatable were quickly validated and after the deck started to fold in on itself during an attempt to get on plane. We turned around and walked the boat back ashore… 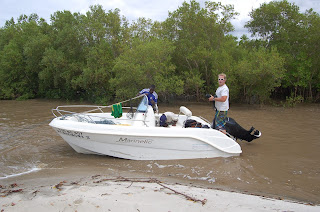 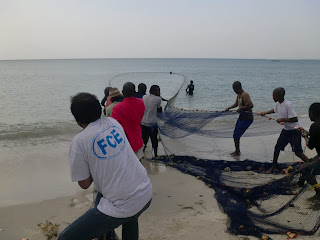 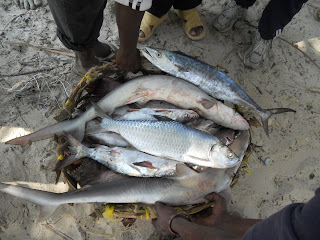 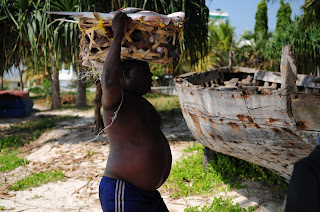 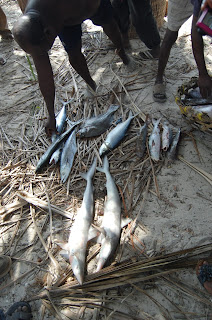 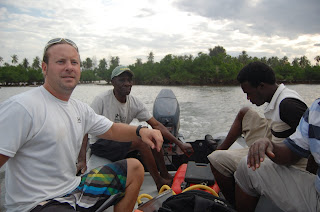 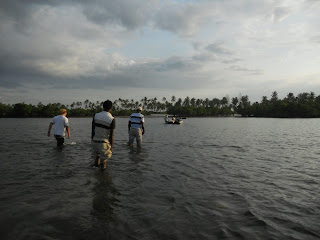 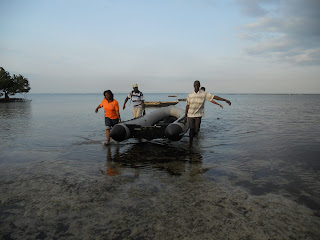 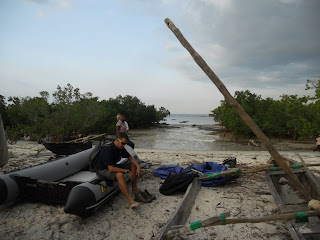