Devil Sharks: Science Behind the Show

Scientists studying the active volcano of Kavachi in the southwest Pacific got a real surprise when they found sharks living inside the caldera a few years ago.

When you first think about sharks and volcanoes few would expect a special attraction — including me. But I was asked about exploring the links between the two, I was intrigued. For the last two years I’ve been part of the Global FinPrint project — a worldwide effort to survey shark and ray populations on coral reefs that is supported by Paul G. Allen and Vulcan, Inc. I realized that many of the coral reefs we’re working on, and where we see lots of sharks, have volcanic origins.


During the research and filming for Devil Sharks, which premieres at 10 p.m. tonight on Discovery Channel’s Shark Week, we had the opportunity to extend some of the lab's projects, meet and work with amazing scientists from around the world, and learn a lot about volcanoes. Special thanks to Volcanologist Jess Phoenix for showing us around the Big Island of Hawaii’s volcanoes — by both air and sea!

So what do we know about the relationship between sharks and volcanoes?

A Nice Place to Call Home

At the most basic level, one thing that makes volcanoes important for sharks (and many other species) is that they create a comfortable habitat — maybe not for us, but certainly for sharks. Even before volcanic activity has created land that pushes above the surface of the ocean, seamounts form and are a place where all kinds of animals congregate.

As islands form, so will many different habitats. In warm waters, coral reefs pop up to create shallow habitats near shore. For some sharks, the shallow waters and even old lava tubes of volcanoes can provide safety from predators. For many sharks, volcanoes provide food, and for others a convenient rest stop. Without question, volcanoes create secure environments in the middle of the ocean where sharks can thrive.

Different species of sharks at different life stages are found in each of these habitats. Because many volcanic islands have steep slopes, open ocean sharks can be found close to shore, providing researchers with great opportunities to study hard-to-find species. During our trip it was great to catch up with Dr. Melanie Hutchinson and see her work on the pelagic sharks you find close to shore off the Kona coast of the Big Island.

Once volcanoes become dormant and islands start to erode away, the volcanoes are still great places for sharks. The shallow waters of lagoons are a perfect place for small sharks to grow up, keeping them safe from larger sharks that would like to eat them.

Work we have done in the islands of French Polynesia, though, suggests that there might be a scramble for food in these nurseries. When baby blacktip reef sharks and baby sicklefin lemon sharks are found together, their diets change — probably because of competition.

Throughout French Polynesia, FIU Ph.D. candidate Frances Farabaugh is sampling reef sharks as part of the Global FinPrint project with Dr. Jeremy Kiszka and Dr. Eric Clua. Some of their work is featured in Devil Sharks. We’re examining how the differences between islands impact the types and numbers of sharks present. We’re also collecting tissue samples to figure out where different species of sharks feed — along the reef, in the lagoon, or in the open ocean — and we are working with Eric to track silvertip sharks.

But wait, what about the heat?
When volcanoes are active and lava is flowing into the water, it creates patches of very warm water. Is warm water part of what attracts sharks to active volcanoes?

Unfortunately, we just don't know. But, we do know that lots of species of sharks and rays move between warm and cold waters (aka behavioral thermoregulation) to help with foraging, digestion and possibly reproduction. With warm waters available, it’s certainly possible that sharks use water around active volcanoes in the same way they use other pockets of warm water.

One question many scientists are interested in is how sharks navigate in what appears to be a completely featureless ocean. Shark tracking has shown that they can swim in nearly straight lines from one island to the next over huge distances.

One possibility is that they use variations in the magnetic field. Work by Carl Meyer, Kim Holland, and James Anderson of the University of Hawaii tells us sharks have an impressive magnetic sense. Using trained baby sharks, they’re now conducting experiments that could help us understand just how small of a difference in magnetic fields they can detect.

Around volcanic islands and features, the strength of the magnetic field can change quite a lot. Here is a neat example from New Zealand. Could sharks use this variation to find their way to and from volcanic islands? Studies of sharks in the wild suggest that they could. Peter Klimley found that the hammerhead sharks he tagged off the coast of Mexico appeared to use variation in the magnetic field to move to and from seamounts.

Do sharks use magnetic fields to navigate over large distances? Researchers are still working on it! Using satellite tags to track movements of many individual sharks — like we did off Saba Island in the Caribbean — is one way to find out. 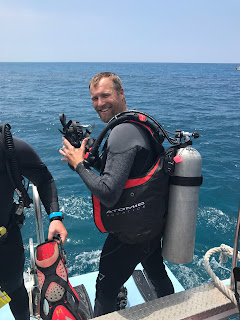 I hope everyone enjoys the show! Thanks to Pangolin Pictures for the invitation to participate.  Also a huge thanks to all who worked on the documentary and those who have supported the research depicted in the film, especially Paul G. Allen, Pangolin Pictures, Divers Direct, Atomic Aquatics, and Exeye Ltd.